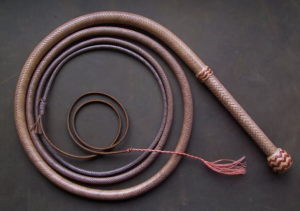 Prospect- Victor “ Skip” E. SanSoucie III, 60, passed away on March 7, 2022, with the support and love of his wife, Lisa and daughter, Erica at The Connecticut Hospice in Branford, CT.

Skip is the high school sweetheart, best friend and soul mate to his wife, Lisa. He is dad and best buddy to his daughter, Erica.

Skip was born on September 19, 1961 in Waterbury, the eldest son of Lorraine ( Swiderski) Zollo. He leaves behind his sister, Victoria (SanSoucie) Canale and her companion, Doug Wipfler of Cheshire, three brothers Lawrence Zollo Jr. and his wife, Suzette (Zambo) of Fairfield, Theodore Zollo of Starke, FL, and Lyle Zollo and his wife, Leigh Ann (Lewis) of Kingsport, TN, his daughter, Erica and her husband, David Cobbol of Cheshire. He also leaves behind many nieces, nephews and family that loves him. He is predeceased by his father Lawrence J. Zollo.

Skip was an Artisan Craftsman known worldwide for being one of a handful of whip makers who still made American Bullwhips. He was featured in the Discovery UK series “History in The Making” which focused on skilled craftsmen making historically significant items using the original, time-honored methods.

Skip was a gifted magician, known for his cards and coins sleight of hand. For years he performed as part of the team Vic and Earl, the Earl being his friend Gil Earl. For over 30 years, they worked together honing their magic act that evolved and changed over the years. They were best known for their side show routines particularly Crime and Punishment, which they performed with friend and cohort, Dave Mousch. Skip was also a published author. He had articles featured in the Magic Menu, a Close Up Magic Periodical for Professional Restaurant and Bar Magicians, which he was also the Art Director for during its early years. He was a contributor to the book Magic and Meaning with Eugene Berger and was a founding member of the Inner Circle of Bizarre Magic.

Most recently Skip was working with his sister Vickie on “Yeah, That Can’t Be Good” – An Eureka re-watch podcast. Listeners would comment that the episodes in which Skip was co-host were some of the best, due to the fun exchange between Skip and Vickie on-air.

Skip was a man who took pride in all that he did. His day job as a Head Custodian spanned over 40 years. Retiring from the City of Waterbury, he went on to work for Region 16 School District in the Town of Prospect, he went above and beyond ensuring that his building was a clean and safe environment for the students and staff. He not only took care of the building and grounds, but he was also considered part of a team of educators. Skip shared his knowledge and led by example. He did mini workshops on the engineering and design of whips, how to start a small business and design a web page at the High School, as well as, cards and coins for the TAGS students at the Middle School.

The Family would like to extend their deep appreciation to everyone at Saint Mary’s Hospital, Saint Francis Hospital, Massachusetts General Hospital of Boston and finally The Connecticut Hospice in Branford, who helped support and care for Skip during this time. They would also like to express a special gratitude to Dr. Beri and Dr. Nicolescu for their personal connection with Skip, which was very important to him. A special thank you to Mary from CT Hospice, who help guide us through Skip’s final journey with love, respect and understanding.

Services will be private for immediate family. Burial will be at the New North Cemetery, Woodbury. The Woodbury Funeral Home of Munson-Lovetere, 2 School St. is in charge of the arrangements. To leave an online condolence, please visit www.munsonloveterefuneralhome.com.

To send flowers to the family or plant a tree in memory of Victor "Skip" E. SanSoucie III, please visit our floral store.