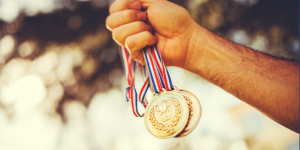 James O. Duncan, 87 years old,of Woodbury, passed away Sunday, April 26,  at a The Lutheran Home of Southbury after complications from dementia. Jim was a successful businessman, Masters Track & Field athlete, coach and mentor. A star quarterback in both high school and college, Jim went on to coach football at Garden City Junior College and his alma mater Ottawa University in Kansas. Athletics was his lifelong love. His father, Howard N. Duncan, mentored Jim in the apparel industry. Teaching him about the machinery, cutting garments and sewing. Jim went onto having a successful career in the apparel industry and honed his negotiating skills to mediating union contracts. His exemplary skill set caught the eyes and ears of New York City apparel executives and Jim was recruited to NYC to call on the major retail chains like Sears and JC Penney Co. It was there that he met his wife Joan (Joni) of 30 years. For years, they were a design/ selling team, working in several different apparel Companies such as Smoler Bros & Dary Sue, then forging their own path, they started “joni james” , a knit fashion house selling the likes of Sears, JC Penney & Spiegles catalogue.
When USA manufacturing all  but disappeared, Jim returned to his first love-athletics. He went back to school and got certified as a personal fitness trainer and Pilates instructor. At the same time a friend encouraged him to start competing in Masters Track & Field events.  Always a good “thrower”, Jim started competing in “throw events”—the javelin, shot and discus. He excelled at all of them-winning medal after medal, competing worldwide-Australia, England, Mexico. Jim went on to expand his competitions to the pentathlon then the decathlon. Even after shoulder surgery and a knee replacement.  So much so, that the Orthopedic  division of Waterbury Hospital launched an ad campaign “Keeping You # 1” with Jim. Jim could be seen on billboards on RT 84 and in full page ads in the Republican American.
Jim also volunteered his time and love of track to Woodbury’s own Nonnewaug Girls Track team.
What  Jim truly enjoyed most  was instructing his Pilates and Balance classes at Senior Centers-Woodbury, Southbury & Middlebury. And, Woodbury Senior Center became Jim’s second home., conducting early morning Pilates classes then  the Balance class.  He loved keeping his friends and neighbors fit and they loved him back. In 2017, “Aging Well CT” spotlighted Jim and his philosophy of staying fit.
Jim often accompanied his wife on her business  travels.  Rome, Paris, London Dusselforf and Amsterdam. Rome was his favorite.
Jim was an active Catholic and parishioner of St Teresa of Avila Church in Woodbury.  He enjoyed the camaraderie  of The Mens Club, volunteering and teaching the RCIA program.
Jim is predeceased by his father, Howard N. Duncan and his mother, Margaret Rosso Duncan and his son, James Scott Duncan.
Jim leaves behind his wife Joan of 30 years, his sister , Janet Nelson and her husband Dennis and his children:  Thomas Duncan, Michael Duncan, Susan Kusinitz and Nancy Goematt and their spouses and their children.
There will be a private graveside burial service at New North Cemetery in Woodbury.  A “Celebration of Life” service will be held at a future date.
In lieu of flowers a  donation in Jim’s name  to Woodbury Food Bank is requested. To leave an online condolence please visit www.munsonloveterefuneralhome.

To send flowers to the family or plant a tree in memory of James O. Duncan, please visit our floral store.

You can still show your support by sending flowers directly to the family, or by planting a memorial tree in the memory of James O. Duncan
Share a memory
© 2021 Munson-Lovetere Funeral Home. All Rights Reserved. Funeral Home website by CFS & TA | Terms of Use | Privacy Policy