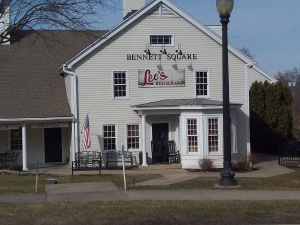 SOUTHBURY - Homer Lyman “HL” Bennett Jr. passed away peacefully December 21, 2020. HL was born in Southbury on April 27, 1928, to Homer Sr. & Edith (Roulston) Bennett. Homer graduated Woodbury High School Class of 1946 and was the last living member of his class. After high school he served on the aircraft carrier U.S.S. Franklin D. Roosevelt in the precarious position of tail gunner in a fighter bomber. He returned home to Southbury at the end of World War II to establish his business and start a family. He purchased land and a small home on Main Street South to live and work. The H.L. Bennett Jr. Company was started in 1953 as a local refuse company and continues today.

He constructed the first building of Bennett Square in 1973 and purchased the last building in 1993 where Leo’s is located today. Homer was a lifelong member of the United Church of Christ of Southbury, and a member of the Southbury Lions Club, and the George Newton VFW Post 1607. He was also a volunteer for many years as a driver for the Southbury Volunteer Ambulance Association to further serve the people of town. He was an avid golfer and loved to play with his two grandsons at the Heritage Village Country Club. He split his time between his residence in Palm Beach Shores, Florida and the home he remained in until his death on Main St in Southbury.

Homer had a wonderful life until his life partner of 50 years Margaret “Peg” Tester passed away earlier this year. He is survived by his sister Joan (Bennett) Murphy of Southbury, and his brother Craig Bennett  of Woodbury, and his brother in law Robert Hansen of Stuart, FL; as well as his sons, Jay Bennett (Zoey Loglisci) and Kevin (Alicia) Bennett and their two sons Nathan Thomas Bennett and Luke Allen Bennett of Southbury. Also Peg Tester’s children Kim Tester (Brian Duda) of Roxbury, Kathy Luria of Woodbury, her son Jason, and James (April) Tester of Wellington. FL. He also has many nieces and nephews.  Homer is predeceased by his late wife Doris (George) Bennett, his eldest sister Arline (Bennett) Hansen and his two brothers Donald and David Bennett. A private graveside service will be held by the family on Saturday December 26th at the White Oak Cemetery, no calling hours will be held. In lieu of flowers contributions in Homers memory may be made to the White Oak Cemetery c/o Benjamin Stiles, 1127 Main St. North in Southbury, to assist in upkeep; or to the United Church of Christ, 283 Main St. North in Southbury, CT. To leave an online condolence please visit www.munsonloveterefuneralhome.com.

To send flowers to the family or plant a tree in memory of Homer L. Bennett Jr., please visit our floral store.

You can still show your support by sending flowers directly to the family, or by planting a memorial tree in the memory of Homer L. Bennett Jr.
Share a memory
© 2021 Munson-Lovetere Funeral Home. All Rights Reserved. Funeral Home website by CFS & TA | Terms of Use | Privacy Policy