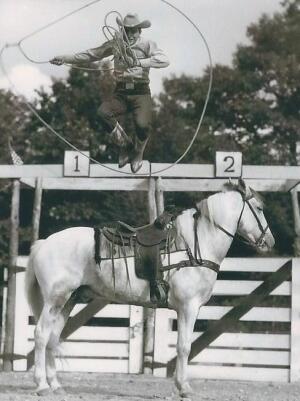 Dante R. Civitello, aged 95, passed away on Monday, November 16th at St.
Mary's Hospital in Waterbury. He was the devoted husband of the late
JoAnna Marie Civitello and the father of six children. Dante was born on
August 17th, 1925 in Waterbury, Connecticut. He was the son of Domenick
Civitello and Luisa (DiLella) Civitello. Dante will be remembered by his
family and all who knew him as a Renaissance man who excelled at every
new endeavor. He began working at age eight as a shoe-shine boy during the
Great Depression to help support his family. He graduated from Crosby High
School in Waterbury. He served in Europe during World War II, earning an
honorable discharge. A fan of western movies as a boy, Dante taught himself
to trick ride and train horses, traveling the United States as a rodeo performer.
He was a member of the Professional Rodeo Cowboys Association. He
performed in Madison Square Garden, performed in the Roy Rogers Rodeo,
and was memorialized at the Gene Autry Museum in Los Angeles,
California. While working as head wrangler and main entertainer at the Lost
Wilderness Dude Ranch in Sandisfield, Massachusetts, Dante met the love of
his life, JoAnna Costello, a New York City girl who was vacationing at the
ranch. They married and raised a large family. They remained devoted to one
another until JoAnna’s death on August 19, 2017. Dante taught himself
harness-making and leather-making and founded his tack and riding store,
Dan’s Frontier Store and Harness Shop, in Waterbury. The store relocated to
Woodbury, Connecticut in 1965 and gained the reputation of a premier
destination in the tri-state era for horse lovers. He was known nationally as a
master leatherworker and harness maker. He shared his knowledge with
harness makers across the country, and was a contributing author to the Draft
Horse Journal. He attended the World Wide College of Auctioneering in
Mason City, Iowa and enjoyed running a second business as a local
auctioneer. Throughout his life, Dante was an avid musician, having taught
himself to play guitar, banjo, harmonica, drums, and last, but not least, a
washtub guitar. He was a member of the Bristol Old Time Fiddlers, and
hosted many country music jams at Dan’s Frontier Store. His contributions to
music in Woodbury were officially recognized by the Town of Woodbury in
a ceremony at the Woodbury North Green gazebo, where his legacy is
memorialized for future generations. Dante had a love of photography and
film making, with one full-length film to his credit. He wrote several articles
for local newspapers, including the Waterbury Republican. He enjoyed steer
roping with his roping partner Malcolm Baldridge, formerly of Woodbury,
Connecticut. He had a keen eye for horseflesh, and loved his draft horse
Sampson, who was recognized by the Guinness Book of World Records as
the largest horse in the world at the time. Dante is survived and deeply
mourned by his brothers Archimedes Rudolfo Civitello and Paul Julio
Civitello, and his six children Donna Jean Civitello, Bette Ann Kitik, Lisa
Marie DeAngelis, Daniel John Civitello, JoAnna Lynn Abraham and James
Anthony Civitello. He is also survived by his daughter-in-law Jill Semple
Civitello and his sons-in-law Robert Forrest Carter, Norman James
DeAngelis and Eric Walter Kitik; his grandchildren Drew Alexander Kitik,
Lila Elizabeth Kitik, Melanie Grace Kitik, James Anthony Civitello, Jr.,
Robert Paul Civitello, Nicholas John Civitello, Megan Lynn Civitello, Rachel
Leigh Abraham, Christopher Michael DeAngelis, Joseph Anthony
DeAngelis, Grace Marie DeAngelis, and many nieces and nephews,
including his nephew Charles Linder, whom he considered his honorary son.
He is predeceased by his sisters Marie Antoinette Civitello, Aurora Beatrice
Civitello, his brother Eduardo Romeo Civitello and his granddaughter
Angelina Marie DeAngelis. Funeral services will be held privately. In lieu of
flowers, please consider charitable contributions in Dante's name to the
Wounded Warrior Project, 4899 Belfort Road, Suite 300 Jacksonville,
Florida 32256.

To send flowers to the family or plant a tree in memory of Dante R. Civitello, please visit our floral store.