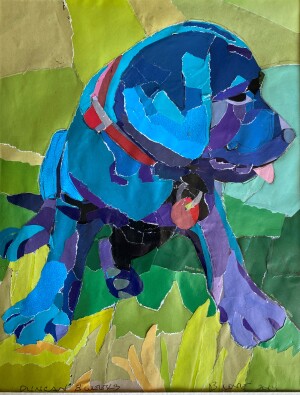 Betsy Higby Love passed away peacefully at her home in Woodbury, CT on May 8, 2020, with her life partner Larry Kaine by her side. Betsy was born on April 28, 1951, in Bronxville, NY to William Thomas Love, Jr. and Marianne Thompson Love and grew up and attended grade school in Dutchess County, NY.

Betsy attended Franklin High School in New York City and began her lifelong passion for the visual arts through classes at the Museum of Modern Art. She attended and graduated from the Philadelphia College of Art in 1974. During college, Betsy worked at the Moravain Pottery and Tile Works in Doylestown, PA, which had a distant influence on her later work.

Betsy spent much of her art career working out of her studio in Lambertville, NJ, and was known for her handmade pottery and commemorative tiles for the annual Lambertville Shad Festival. Betsy's work also included numerous oil paintings and collages on paper. Betsy married Stephen R.R. Sasala II, in 1996. Living in Sergeantsville, NJ, Betsy played a large role in the care of her mother during this time and later brought her unique ability to care for elder to her work as an art educator in senior living communities.

Betsy moved to Woodbury, CT in 2002. She brought her love of the visual arts to her work with individuals with acquired brain injury at Mindscape Industries. Betsy was an active member of the Woodbury United Methodist Church; she was a member of the board and spent much time engaging in church activities. Betsy even rode her lawnmower down to the church to mow the lawn. Betsy especially loved long walks around time, always with one black lab at her side, or sometimes two. After many happy years in Woodbury, Betsy lost Steve to his battle with cancer in 2009.

Betsy was later blessed to find a new life partner, Larry Kaine. They enjoyed meals with friends, trips to Cape Cod and many other joys. After finding much happiness together, but too few carefree years, Betsy developed Dementia and Parkinson's. Larry totally devoted himself to Betsy's care as her illness progressed.

Betsy was a fun-loving aunt and sister, and especially enjoyed family gatherings. She is survived by her life partner, Larry Kaine, of Woodbury, CT, sister Mimi Love-Nicholson and brother-in-law, Tom Nicholson, of Middlebury, VT. Cousins, Christine Names, of Norwalk, CT and Barbara Konieczka, of Kalamazoo, VT, Uncle Ralph Thompson if Ithaca, NY and many nieces, nephews, grand-nephews and grand-nieces. Betsy was predeceased by her Husband, Stephen Sasala, a sister, Susan Love Purdy and by her parents.

Betsy's life will be celebrated at a later date in Woodbury, CT

To send flowers to the family or plant a tree in memory of Betsy H. (Higby) Love, please visit our floral store.

You can still show your support by sending flowers directly to the family, or by planting a memorial tree in the memory of Betsy H. (Higby) Love
Share a memory
© 2021 Munson-Lovetere Funeral Home. All Rights Reserved. Funeral Home website by CFS & TA | Terms of Use | Privacy Policy