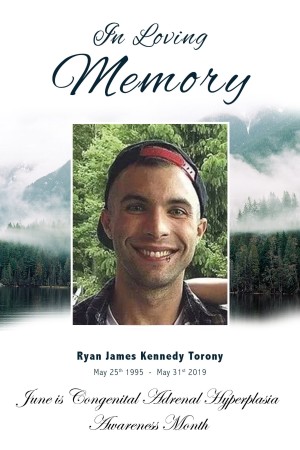 Ryan James Kennedy Torony, age 24, died the morning of May 31, 2019 in Latham NY from adrenal failure.  He was the beloved and cherished son of Lynn and Jim Torony of Southbury, and brother and best friend of his sister Rachael Torony of Charlotte, NC – who all miss him terribly.  Born in New Haven CT on May 25, 1995, he grew up in Southbury, and moved to the Albany area to attend SUNY at Albany, and was in the process of moving back to his native CT.  He was a graduate of Pomperaug High School, class of 2013.

Hours after Ryan was born at Yale New Haven Hospital, he was whisked to the Yale Newborn Intensive Care Unit.  He had group B strep, which at that time had a high infant mortality rate.  Several days later while in a coma he began to crash, and because of the incredible and experienced staff at the Yale NICU, they were able to ultimately diagnose him with a rare endocrine disorder called Congenital Adrenal Hyperplasia (CAH), and changed their course of treatment accordingly.  The doctors said that newborns live off of the residual hormones from the mom for several days until their endocrine system takes over; if he had been home when this happened, without the CAH diagnosis in place to ensure proper treatment – it was unlikely that he would have survived.  The group B strep, which nearly killed him, saved his life.  This was one of many miracles and odds beating occurrences in his life.

He remained comatose and on life support for weeks.  It was very touch and go, and we thought we lost him multiple times.  He opened his eyes once for a moment and they were dark and distant…we thought he was already gone.  Father Dominic Valla of St. Thomas the Apostle Church administered last rites…and he told us that Ryan’s eyes opened, and shone brightly – and he saw the light of God in them.  There were several attempts to remove his respirator, but he still could not breath on his own.  During rounds, one of the residents came up with an unconventional approach to help improve his lung function – and it worked!  A week or so passed and he continued to improve – then our miracle baby boy came home to join his 15-month-old sister Rachael, who adored him.  We were the most grateful and blessed family and were highly aware of how fortunate we were.  Every night at bed time for many years, his mom whispered “thank you for staying buddy” in his ear before kissing him gently goodnight.

Ryan bravely faced a lifetime of challenges related to CAH, but he ALWAYS did this with grace, humor, positivity and uncommon strength and determination…with nary an ounce of self-pity.  His medical case was used to lobby the CT Legislature to add CAH testing to the newborn standard tests, and this is now done routinely in CT at birth, and across the country in many other states.  Ryan also participated in a multi-year experimental medical trial at Mount Sinai and Columbia Presbyterian Hospitals in NYC.  The trial required daily injections, some with very large needles that were quite painful - but this 6-year-old (when he started) endured it like a trouper, and when he became older, he self-administered.  This course of treatment worked, and is now the standard of care across the globe for specific conditions associated with CAH.  Even as a young teen he counselled new parents of children born with CAH, giving them enthusiastic feedback and a positive outlook for a high quality of life for their child.

At age 13 Ryan became paralyzed due to an inwardly herniated disc.  After emergency back surgery and another stay at Yale Children’s Hospital and later at the Hospital for Special Care in New Britain, he came back home after about 2 months - and once again he faced things with grace, humor and uncommon strength and determination.  After about a year, he started to slowly regain the use of the lower part of his body – and with ½ dozen additional reconstruction surgeries, and what developed into a deep commitment to physical fitness and nutrition – he transformed himself into a positive force, and proved that with an intensely positive spirit, the grace of God, and love of life, family and friends…anything is possible.  In 2016 he became the first adult under the age of 35 in the U.S. to undergo an experimental nerve augmentation procedure in a clinical trial at Seattle Children’s Hospital.  This procedure was developed in the Netherlands for patients with spinal cord injuries or spina bifida.  Nerve regeneration is more difficult in older patients, so he was a perfect candidate for the trial due to his age and nature of residual nerve damage from his spinal cord injury.  The surgery did allow him to regain some nerve function, and hopefully will further the cause to make this a standard treatment.  The dedicated, compassionate and skilled medical professionals who gave Ryan life, and the ability to live it are our angels on earth.

Despite all of these things, Ryan never let his medical issues define him.  They were part of him, and we needed to make sure there was a high level of awareness about his CAH by those around him because emergency medicine and care was required in case of injuries, flu, dehydration, etc. – but he had a very full mostly normal and active life, filled with love and living.  Family and friends were everything to him, and he was an old soul and he enjoyed deep conversations with everyone.  He and his big sister Rachael were very close their whole lives.  They never fought, except for a short period when Ryan was about 4 and Rachael was 5; he seemed to find some level of enjoyment pushing her buttons and making her cry.  This ended pretty much after we witnessed him doing this to Rachael on the swing set in the back yard…getting her so upset that she gave him a right hook which knocked him off the swing – which got the relationship back on equal footing, and they remained best friends ever since.

Ryan made the world a better place, and our lives are forever enriched by him.  He was blessed to have a large group of cousins that he grew up with and was very close to, and he enjoyed many family parties over the years.  He remained close with the craziest and most beautiful group of friends whom he has known since elementary school, and are now all fine young men.  They are his brothers, and our extended children.  They were with Ryan through the good times, and the rough times, and were a huge part of his spirited life.  They bust each other’s chops relentlessly, but have each other’s backs unconditionally.  He was a true romantic, and he has both loved deeply, and has been loved deeply – and he experienced deep fulfilment and grew tremendously from this.  In college he was active in the Alpha Sigma Phi fraternity, and over his life has traveled to Sweden, Mexico, Canada, Australia (a wish granted by the wonderful Make-A-Wish Foundation), and across the U.S.  He shared his heart, humor, spirit and light openly, which resulted in deep bonds with a broad group of very special people.  Wherever he went, whatever he did – he was all in, good spirited, and he truly lived life.  He brought out the best in us, and will be forever missed…but forever remembered and honored.  His spirit remains in the hearts of many.  He loved family, friends, people, dogs, a few special cats, hot sauce, and was a total foodie.

Family and friends may say farewell to Ryan on Thursday June 6 from 5 to 8 p.m. at the Munson-Lovetere Funeral Home, 235 Main St N, Southbury.  Funeral services will be held Friday June 7, 2019 at 11:00 a.m. at Sacred Heart Church, 910 Main St S, Southbury.  In lieu of flowers, memorial contributions may be made to Congenital Adrenal Hyperplasia, Research, Education & Support Foundation, Inc.  (CARES Foundation) at www.caresfoundation.org/donation/, or the Make-A-Wish Foundation at www.wish.org

To send flowers to the family or plant a tree in memory of Ryan James Kennedy Torony, please visit our floral store.